skip to main | skip to sidebar

The challenge has been set. James Randi, Osteopathy-64 is waiting for your reply... 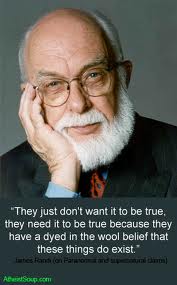 A french version of this article is available here

James Randi is a magician who for the last 30 years has been fighting pseudo-sciences, and the belief in paranormal phenomena.
As it is impossible to prove the inexistence of a paranormal phenomenon, James Randi had the clever idea to offer $1,000,000 (initially $10,000) to anyone who can prove to have paranormal ability.
The "James Randi Educational Fundation" (JREF) was created and for the last 30+ years, many mediums, telepaths, telekinepaths, healers(...) tried to take up the challenge but failed to prove their "extra-ordinary non-existing" gift.
No one ever won this Challenge.


What an interesting challenge for Osteopathy-64 !

James Randi, Thank you very much !

First of all we need to thank James Randi for being the instigator of such a project. Billions of people around the world believe in paranormal phenomena and millions of people use these beliefs to make money and exploit these believers. These irrational beliefs lead to distorted reasonings, provide false solutions, give false hopes, are responsible for the death of individuals, and are a colossal waste of money, time and intellectual resources for the entire humanity. (proof could be the time spent writing this article and you reading it!)

As we said in the introduction it is very difficult to prove the non existence of a phenomenon whereas it is very easy to claim the existence of a phenomenon without being contradicted. For example: "There is a rugby ball that floats in our solar system elsewhere than on Earth." It may seem incongruous, but as it is impossible to search the entire solar system it is impossible to prove this statement false.   Yet this is the type of reasoning that is at the origin of religions, cults, and many other irrational beliefs. The saying "the absence of evidence is not evidence of absence" is often used by those who defend the existence of paranormal phenomena.

Offering such a price (the sum of $ 1,000,000) seems to be an effective way to motivate anyone who has a paranormal ability to make themselves known to the JREF in order to prove their extraordinary ability. As no one has won this award for the past 30 years, it would seem that nobody, possessing paranormal abilities, has:

Wikipedia:
Paranormal is a general term (coined ca. 1915–1920[1][2]) that designates experiences that lie outside "the range of normal experience or scientific explanation"[3] or that indicates phenomena understood to be outside of science's current ability to explain or measure.[1][4] Paranormal phenomena are distinct from certain hypothetical entities, such as dark matter and dark energy, only insofar as paranormal phenomena are inconsistent with the world as already understood through empirical observation coupled with scientific methodology.[5]

Although this definition is quite clear, one could distinguish between a paranormal phenomenon and a "peri-normal" phenomenon (a term coined (?) by Dr. R. Dawkins). A paranormal phenomenon could be something that is a fantasy, an absolute impossibility, or a transgression that is only  possible in our imagination. As for the "peri-normal" it would be a phenomenon that is not yet proven at the present time but that will be in the future, but... if we retain the definition of "paranormal", it is something that is not currently explained by science. So if you have an ability that has not been demonstrated yet by science, your "gift" can be considered as paranormal.

In the following video we will see Dr. Richard Dawkins with James Randi talking about the $ 1000000 challenge and the possibility that this challenge could be won by a phenomenon "peri-normal" (see 4min50s):

If this theory is correct then it may well be that the patient's emotional state has an ideomotor effect and that this effect increases the inherent muscle tone of some muscles of the body. If it is true that the osteopath can feel this increase in muscle tone with the use of fascial and cranial techniques then it is possible that he can feel the ideomotor effect of certain emotions and therefore he can recognise  the emotional state of a patient by palpation.


It is possible to differentiate, blindfolded, through the sense of touch at least two different emotional states (such as anger and serenity) in an individual. The techniques used will be fascial and cranial techniques.

The test groupe: age between 20 and 35 years, without histories of major physical or psychological trauma.


Why can this challenge be considered as a paranormal phenomenon?

The author does not claim to be the the only one being able to do this, many osteopaths and anyone with some palpatory skills can achieve it.

1. The techniques used for this challenge (fascial and cranial techniques)  are considered ineffective in the eyes of science and the use of these techniques is even considered as quackery. In France the National Academy of Medicine has pushed for their withdrawal from osteopathic curriculum. On the JREF website we can also read about it : see here


"There is no scientific support for major elements of the underlying model, there is little scientific evidence to support the therapy, and research methods that could conclusively evaluate the therapy's effectiveness have not been applied."

2. It has never been scientifically proven that we can feel the emotional state of someone else through the use of palpation. One might think that differentiating two emotional states is an easy task, but to prove it significantly (more than 16 times out of 20 for example) is not necessarily that easy. If you are stressed, if the subject is under stress (divorce, recent loss, lost his job ...), if two of your subjects are psychopathic or sociopathic and unable to feel an emotion, if they had a violent past trauma not remembered (as a baby/child), are all factors that may induce error in your judgment and greatly reduce your chances to differentiate these two emotional states. This is why, even if it could be possible to feel and differentiate more  emotional states, just being able to successfully 2 is already a good challenge.

This ability, if it exists, should be classified as a "peri-normal" phenomenon and we can only agree with ​​Dr. Richard Dawkins because this ability follows a logical sequence of events that could be explained scientifically but which are not yet proven. But as this definition does not exist in the dictionary then we must classify this phenomenon as "paranormal".

What would be an idea of ​​protocol in order to prove this "claim"?

1. The "guinea pigs" must be relatively young (20-35years), because if they are young they will have a better muscle quality, thus it is clearer to distinguish the "at rest" muscle tone vs a hypertonic state. With older patients/guinea pigs/volunteers, chronic stress or chronic physical labor can make their muscles fibrotic and reduce the Δ (variation) of contractility , making the fascial (techniques on the fasciae) "reading" harder.
2. These subjects should not have had any kind of major physical, emotional, pathological trauma,  or suffering from a severe or important chronic stress. These factors can increase the inherent muscle tone that can blur the clarity of the fascial "reading".
3. Psychopaths and sociopaths should be avoided as they may have difficulties in feeling emotions!
4. A number of 20 subjects would be ideal, and the "claim" should be validated if one (the therapist) can correctly guess at least 16 out of 20 emotional states.
5. The therapist is looking for a change in the inherent muscle tone with cranial and fascial techniques. Therefore the therapist must first test the volunteers when they're relaxed.
6. The the volunteers flip a coin (or pick up a paper, ball...) which will decide the emotion they will simulate (anger or serenity / calm)
7. After a "beep" sound the guinea pigs should imagine different situations where they feel this emotion (conflict with someone / on the beach in the sun) for one minute in the most intense way possible, without showing it physically of course. A hypnotherapist may be asked to help to lead this state.
8. In 30 sec, the therapist blind folded (while the volunteers continue to imagine their emotional state) must guess the imagined emotional state using  cranial or fascial techniques.

What can we use this pseudo-gift for?

It is definitely not as useful as telepathy or telekinesis!


The implications of this "peri-normal" phenomenon are actually quite important:

Firstly it would show that the human body is very subtle and has "peri-normal" capabilities that until today were still unsuspected.
This could be a new and more rational explanation for cranial osteopathy. This explanation opens up a new horizon of research. Indeed so far research in cranial osteopathy was not successful because we were looking in the wrong place!
What about visceral and fascial motility? Are they also a palpatory illusion due to the ideomotor effect?
If the therapist can feel two diametrically opposed emotional states, could he feel even more emotional states ? 3, 4 5?
Is it possible to date these emotions?
If the therapist succeeds to release a muscle tension caused by a strong emotion, can it affect the psychology of the patient? Does this therapy becomes somato-psychological?
Can there be an ideomotor communication? Can the therapist describe the patient's personality through fascial/cranial techniques without falling into cold reading techniques?
Does the muscle tone of certain muscle groups affects the psychology of an individual?

These issues will need answers if the theory of ideomotor effect in osteopathy is to be verified.

What about Osteopathy-64's application to the JREF?

Despite sending two emails to know if the file was accepted or rejected, there has been no further news.

Some critics say the James Randi Educational Foundation  (JREF) refuses challenges that would be too risky for their $ 1000000. Is it in the interest of the JREF to lose $ 1 million?
But let's not be conspiratorial in nature, the JREF is very busy handling many issues and organizing seminars for the development of critical thinking and fighting paranormal claims and movements, which is in the best interest of humanity.

But we shouldn't let this "claim" fall into oblivion. This is why osteopathy-64 launches this article and a humorous little video to remind James Randi and the JREF they have a response to give to osteopathy-64's "claim".

Thank you for your support,

The risk of cervical manipulation and the birthday paradox

How do you find this blog ?

My Favorite Osteopathic and Health Books

My name is Pierre de Lasteyrie du Saillant and I graduated from the European School of Osteopathy, UK, with a BSc(Hons) in Osteopathy. After working in Scotland at the Active X Clinic, I worked in Thailand and Malaysia for more than 2 years. I came back to London in 2008 and worked as an Osteopath in Crystal Palace and did some tutorial at the BCOM (British College of Osteopathic Medicine). In 2009 I moved back to the South West of France, where I now practice in Urrugne.